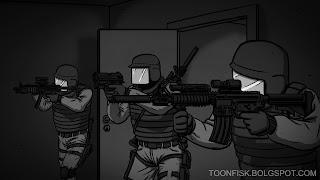 I Worked on this  animated-news-film for "Politiken" (the largest newspaper in Denmark), in collaboration with Animation HUB.
It's about a terrorist attack aimed at the "Politikkens hus" where "Jylandsposten" the newspaper that published the Muhammad drawings lies.
It was exciting to work on a real incident in close cooperation with the journalist Morten Skjoldager, who had researched the story in a year.
It was very challenging then everything should be confirmed, for example: we couldn´t show how many there were in the PTA car, because the police obviously would not give that information about their secret intelligence service.
So it was very special to put the storyboard together, as there were many things we could not show and we did not have the liberty to invent anything else as you normally have in the animation industry.

I was instructor on the project and also created the storyboard, some backgrounds, drawn and designed the swat guys and made all composeting and camera movement.

unfortunately there is an advertisement first but it can be closed
and it is in Danish sorry :/
enjoy